Watching TV is one of my favorite activities to unwind at the end of the day. These are my favorite and the best TV shows on Amazon Prime.

Watching TV is my favorite way to relax and unwind at the end of the day. We cycle through streaming services depending on what shows are out or the time of year. We have Amazon Prime, so I always have access to shows and movies there. I will admit that Amazon Prime is less of a go-to for me when I’m searching for a show. I find the selection a little overwhelming, which makes it hard to find a good show. I’ve dabbled in a few, plus they have several of my favorite older shows, so I figured it was still worth it to share what I think are the best TV shows on Amazon Prime.

The costumes, fast-paced wit, and comedy of The Marvelous Mrs. Maisel have made it an instant classic and one of the best TV shows on Amazon Prime. Amy Sherman-Palladino, who also created Gilmore Girls, created this show. It has the same fast-paced dialogue and feels like Gilmore Girls. It follows Merriam Maisel, a 50’s housewife that decides to pursue a career in stand-up comedy. Maisel (similar to Rory and Lorelie Gilmore) has you cheering for her one minute and then hating her the next. It’s very entertaining and definitely leaves you wanting more.

The Man in the High Castle

Imagine if the Nazis won World War II and took over the East Coast of the United States, while Japan occupied the West Coast. That is the premise of The Man in the High Castle. As a history lover that studied WWII a lot in college, I was drawn into this show because of the premise. The story and the characters completely sucked me in. There is a cycle of liking and disliking the characters, plot twists galore and a strong sci-fi storyline that develops as the show goes on. My husband actually watched this one with me and enjoyed it too. Obviously, the subject matter can be triggering since the show is about Nazis. Just a little warning.

I grew up watching BBC’s Top Gear starring James May, Richard Hammond, and Jeremy Clarkson with my step-dad. The show was basically a talk show about cars. They had celebrity guests compete on their race track, but it was mostly car talk. Occasionally, the show would have a special where May, Hammond, and Clarkson would drive cars through the Artic or a rainforest. They would outfit and “supe up” their cars and complete different driving challenges along the way while teasing each other mercilessly. The show was canceled by BBC because Clarkson is an ass-hole in real life.

Amazon picked up and rebranded as The Grand Tour a few years ago. The hosts have stepped back from filming the tv show, but they do still release a special every few months. My husband is more into the show than I am, but I do watch all of the specials because they are so entertaining.

Chuck is one of those shows where Jesse and I wish we could erase it from our minds so we could watch it again with fresh eyes. Zachary Levi is the most endearing nerd turned super spy. The show is funny, dramatic, and just an excellent watch.

Revenge is the story of Emily. Her father goes to prison and is murdered after being framed by a wealthy family for a series of crimes. She spent her childhood in foster care, juvenile detention. Eventually, a mentor trained her to become like Black Widow basically. The plot is loosely based on the novel The Count of Montecristo. The first few seasons of this show were SO good and totally sucked me in.

I spent the first few months of my marriage binging Desperate Housewives. I never watched it on TV, but the soap opera drama sucked me in. If you aren’t familiar, the show is about a picturesque little street in suburbia where everything seems perfect. But every family has a secret and a lot of drama.

Oh, Heroes. My husband introduced me to this show when I was in college. I was instantly hooked. Part of that may have been Milo Ventimiglia, but mostly because it’s an amazing show about superheroes coming into their powers. Heroes is probably the reason that I fell in love with superhero shows and movies. I think of the show often, and now I’m thinking that it may be time for a rewatch…

If you liked my suggestions for the best TV shows on Amazon Prime, you can also check out my recommendations for Netflix shows and shows on Hulu! 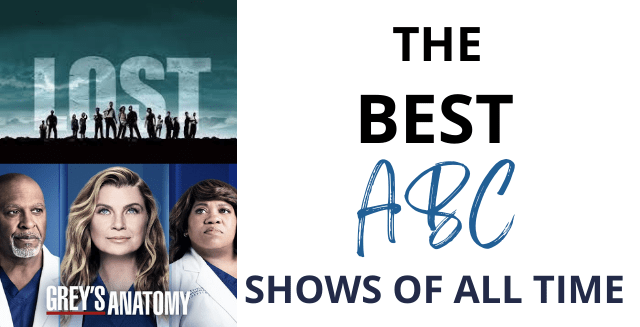