My favorite two-player board games to play for at-home date night. Games are a fun way to unplug and connect with your person!

I’m a firm believer in how important set aside bonding time is with your partner. My husband and I were struggling to find dedicated time for couples activities, so we started doing a weekly at-home date night. We put our phones in the other room and focus on spending time together one night a week after the kids go to bed. Our favorite date night activity is playing board games. It’s a great way to wind down and get out from behind a screen, plus they are just fun. We’re slowly starting to build a two player board games collection because now we’re always on the hunt for something new too. 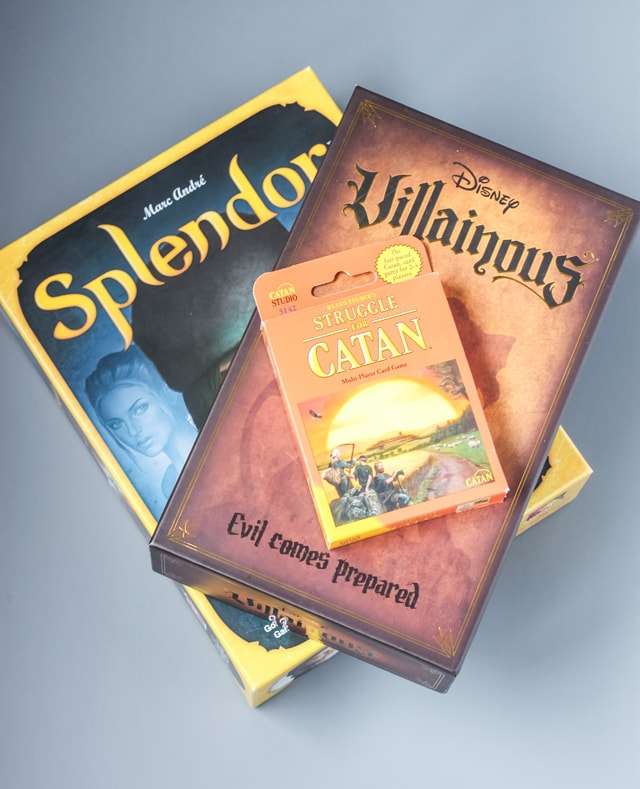 **This post contains affiliate links! I earn a commission from these links.**

Our Favorite Two Player Board Games

Lost Cities is a fast-paced strategic card game. There are 5 (or 6) colors that each represent an “expedition,” each color has cards numbered 2-10 and a few cards that can double, triple or quadruple your score. The object of the game is to earn as many points as possible, but the strategy comes in to play because the cards must be played in ascending order (like solitaire) starting with the cards that can increase your score. Also, each “expedition” starts at -20 points, so if you start an expedition you need to earn at least 20 points to not be in the negative. The game ends when you run out of cards in the draw pile. This game goes by very quickly! We usually play 3-4 rounds and whoever has the most points total is the winner of the night.

Splendor is another strategic card game involving colors, but there’s also gem tokens involved. There are 5 colored gems and you collect gems with each turn. You use the gems to buy cards, which act as additional gems as you collect them. Some of the cards are worth points, but they usually cost a lot of gems. You can also earn points by collecting cards of similar color. Whoever earns 15 points first wins. This game takes a little longer to play and involves a lot of thought and strategy, but it’s another of our favorites. We played this game almost every night during Jesse’s last vacation. 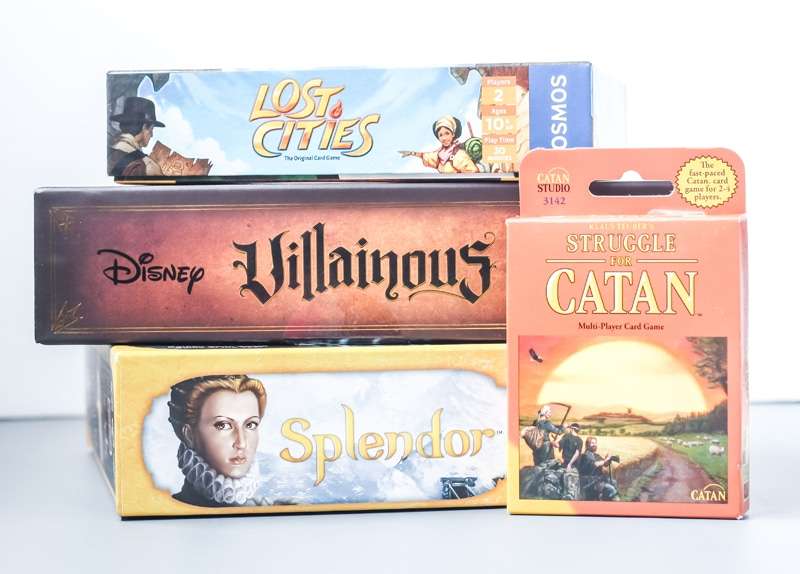 Monopoly is an oldie, but goody in our house. Jesse and I used to play Monopoly all the time when we were dating. We were both in college, broke and living with our parents, so we spent a lot of time playing board games in his mom’s kitchen. We actually still have Jesse’s childhood version of Star Wars Episode 1 Monopoly. I’m sure everyone knows how Monopoly works but if not, you move around a game board and buy property and then earn money by charging other players for landing on your property. You play until someone goes broke. We get super competitive and kind of vicious with Monopoly, so we don’t play it as often.

Scrabble is another of those classic games that almost everyone has on hand. The concept of spelling words and earning points is pretty straightforward. Plus, it’s easily to customize. Depending on your common interests you can make it themed around a favorite movie or TV show, or a subject like travel.

Back in the days before children, Jesse and I spent most of our weekends hanging out at friends’ houses, drinking wine and playing Settlers of Catan. It’s one of our favorite games, but it requires 3-4 people, so it’s not really great for date night. Then, I heard about the Catan card game, Struggle for Catan! It is similar to the board game, without the game pieces. Every player starts with 3 resource cards and you draw more cards with each turn. You use the resources to buy road, settlement and city cards, which are all worth points. The first player to reach 10 points wins. The game goes by quickly and is pretty straightforward, but fun, especially if you are a Catan fan. 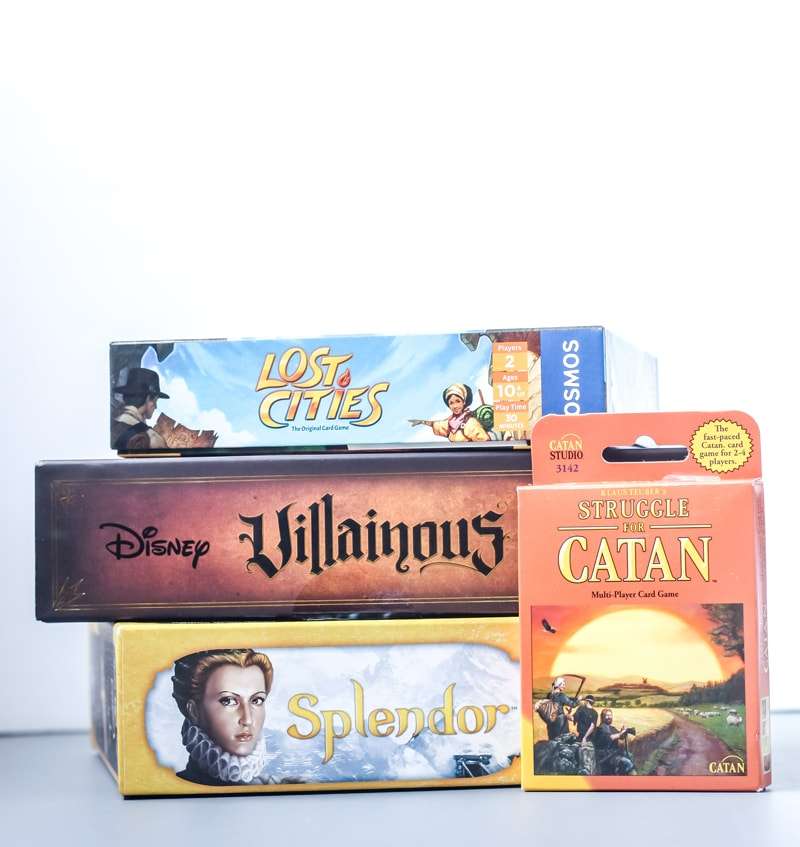 A Disney board game based around villains?! I’m in! I snagged this game for Jesse and I to play for Valentine’s Day and I’m so glad I did. I bought one of the expansions, Evil Comes Prepared, so we could test it out for half the price of the full game. The expansion comes with 3 villains (ours has Scar, Ratigan and Yzma) and each villain has an objective that they must reach in order to win. The graphic design for the game is so pretty and well done. Plus, there are fun callbacks to famous lines and scenes from all of the villain’s movies. For example, some of Yzma’s cards have titles like “Smash It With a Hammer” and “Pull the Lever!”

Villianous has a lot of rules, which vary depending on your character. It’s also important to know your opponents objective because there are plays you can make to slow them down. There is a bit of a learning curve, but after playing a few times we felt like we had the hang of it. The only problem is, now we want to buy all of the other game sets because we want the chance to play each villain!

In addition to the original game, and the expansion we have, there are 2 other expansions. One is Wicked to the Core, which has The Evil Queen, and Perfectly Wretched, with Cruella de Vil (available March 1st). The expansions can be played on their own, so it’s a great way to test out the game and save some money. A Marvel version of Villainous called Infinite Power, was also released in 2020. It’s on my list of games to buy!

Board Games Are the Best Date Night Activity

Spending an hour or so every week playing a board game together has been a lot of fun. It encourages us to unplug and really spend time together, which is much needed to deal with the chaos of life. If you’ve been try to find time for a date night, I’d encourage you to find a few two player board games and set aside one hour each week and make it happen!

Let me know your favorite board games! We’re always searching for new ideas! 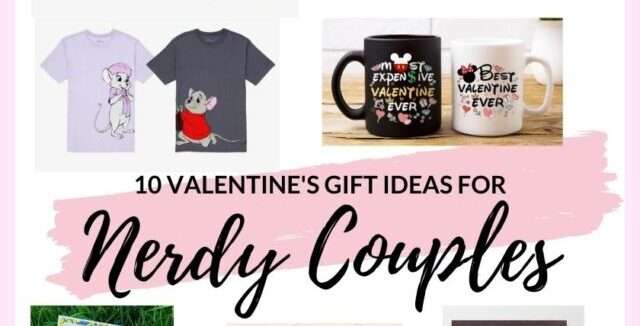 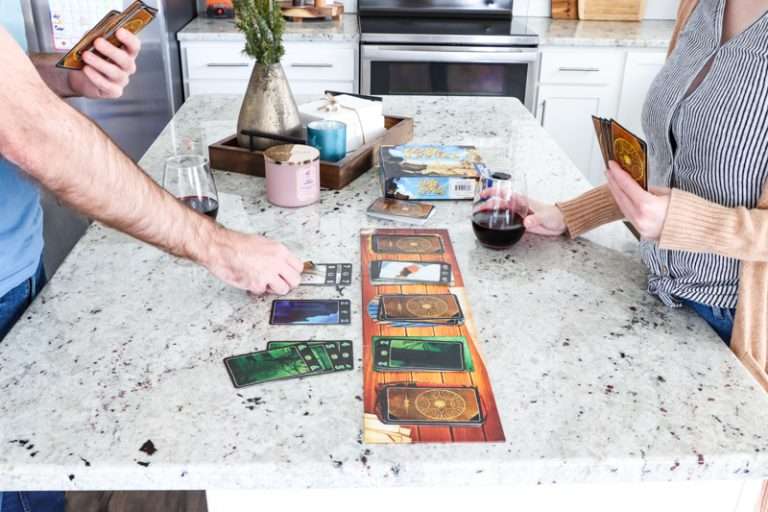 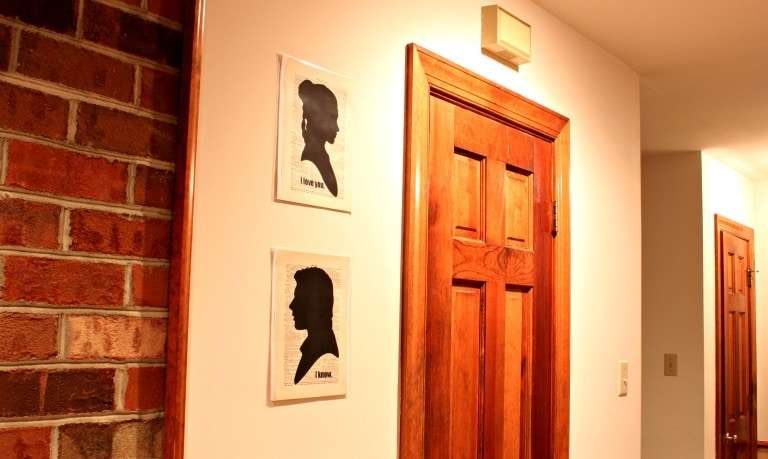 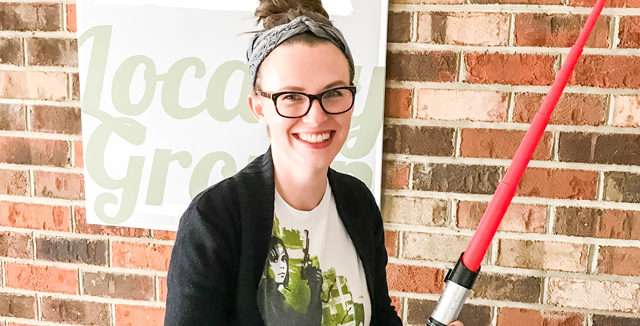 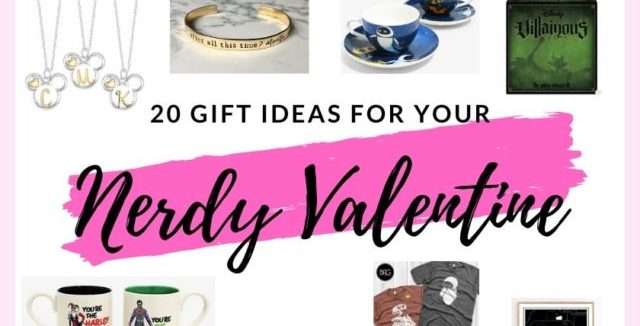